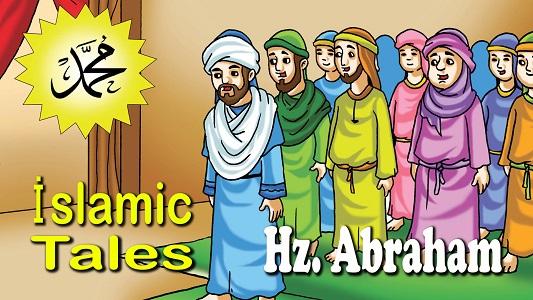 Since last night, Emre had not been giving any comfort to Granny Hatice. He slept with his grandmother at night, asking which prophet he would tell. His grandmother, on the other hand, did not say the name of the prophet in the wise way she always used, but talked about many of his features. Emre fell asleep while his grandmother was talking.

When he got up in the morning, he took his breath with his grandmother again. He was kissing her cheeks. He was trying to find out which prophet would tell his life in the evening. Hatice was not giving a secret to the grandmother. He was very good at making people curious and getting them closer to the result step by step instead of giving the answers to the questions right away. At the breakfast table, the business turned into a competition, questions and guesses multiplied.

That day, Hatice’s Hajj friends would come to the house. Every Friday, they would gather at a friend’s house and read the Quran first and then the Turkish explanation. Ayfer Hanım tidied up the house and went to the kitchen to make something to serve with the tea. Granny Hatice called to her bride:
– My beautiful daughter, don’t tire yourself out and do too much, two types are enough, more than one will make you lose your health.

Ayfer Hanım came to the hall:
– My dear mother, you think of everyone and everything down to the smallest detail. God bless you.
Granny Hatice:
“Isn’t that right, my beautiful girl,” he said, turning on his radio. In the Friday conversation on the radio, the prophet he was going to tell this evening was mentioned.
He thanked Allah, saying, “O great God, how great are you, what beauties you make you live according to your intentions.” Osman Efendi nodded as if he understood his feelings. Afterwards, he asked his wife’s permission and left the house to go to the bookstore of his friend Hilmi Efendi, as he does every Friday.

A little later, close to Friday, Granny Hatice’s friends started to come one by one. At the suggestion of grandmother Hatice, they recited Surah Anbiya and Surah Maryam from the Qur’an that day. Hatice grandmother explained to her friends why she recommended these suras. He told about the conversation they had in the evenings thanks to Emre.
“So I’ll prepare for the evening,” he said. Some of Hatice’s friends were very impressed with this “We Are a Family” work. Some said that this study will never work in our house, everyone goes to the dining room to eat.
Some:
– I see my children and grandchildren from holiday to holiday. He lamented who was chatting with them every evening, who am I?

In the evening, the whole family surrounded Granny Hatice. First, Emre hastily asked: – While talking at breakfast in the morning, “He asked his father questions about his religion at a young age.” Didn’t you say, grandma?
– Yes, because his father used to make and sell idols. He wonders how people worship these things that they have made with their own hands, and he asks, “Daddy, why do you worship things that cannot hear or see and are of no use to you?” he was asking.
– Grandma, why did you make a basmala before saying the question she asked?
– Because that question is the meaning of verses 46 and 47 in Surah Maryam, that is, its explanation, my child.
“What did her father say, grandma?” Zeynep snapped.
– “Are you turning away from my gods? If you don’t give up, I will surely stone you. Get away from me for a long time!” ‘ replied my dear Zeynep.
– Well, what did he do, did he get offended with his father, grandma?
– No, Emre. “Stay cool! I will ask God’s forgiveness for you. Undoubtedly, he has surrounded me with his blessings.” He said that he would pray for his father and other idol worshipers to believe in Allah.

Zeynep is curious:
When asked, “Grandma, how do you know the meanings of these verses by heart?” Hayri Bey said:
“Look, it would be better for me to answer this,” he said. My mother has been reading both the Arabic and Turkish meanings of the Qur’an for as long as I can remember myself. I never saw him go to bed after morning prayers. He also thinks about the verses he reads. How can I apply it to my life, to the lives of my children? Mommy, do you remember when I first started college? You said you were a child who thought, questioning the beliefs of the society in which he lived. You showed the example of being merciful to his father, who did not believe and fired him, but you specifically stated that he did not give up on his beliefs.
– Daddy, then you know which prophet my grandmother told.
– Yes, I know, son.
– Daddy, come on, you tell me please…
– I think your grandmother will tell you who she is soon anyway… But before your grandmother tells you who she is, I will tell you.
If I told you how smart he is…

Murat was even more curious. Hatice granny spoke again:
– Of course, my beautiful son. For example, one day the people of the city were going to the countryside for celebrations… His father told his son to come too, but he did not want to go. After everyone had left, he took an ax and went to the temple. He broke all the idols. He left only the biggest idol. He hung the ax on that idol’s neck. It was the Prophet Abraham who did this clever act. Emre, Zeynep and Murat were very surprised. Because they thought they knew the Prophet Abraham very well.
If Murat:
– I knew that the Prophet Abraham was thrown into the fire and wanted to be burned by the ruler of the time, Nemrud. “I learned that the fire did not burn the Prophet Abraham by Allah’s command and that the fires turned into a rose garden,” he said.

In fact, all of the children knew this, that the Prophet Abraham had a son named Ishmael, and when he was going to sacrifice him to God, God sent a sacrifice. From that day on, they also learned that people sacrificed to gain Allah’s approval during the Eid-al-Adha. However, today was the first time they heard the story. They all asked excitedly:
– Then grandma?
– After the holidays, the children stop by the temple first and they get very angry when they see that all the idols are broken. They suspect the Prophet Abraham because he did not believe in idols. They have İbrahim searched and found and they ask him to account. The Prophet Abraham, showing the idol he left without breaking it, gives the following answer:
– Ask him! Maybe he did. Because the ax hangs around his neck. All the children smiled. They found the answer very clever.
“A thought-provoking answer, isn’t it, guys,” said Osman Efendi.
“Yeah, just like grandma used to tell us,” she smiled.
Zeynep.
“There is definitely humor in it,” said Murat.
“I was very impressed that she prayed for her father, who fired her, without getting angry and offended,” said Mrs. Ayfer.
“What treasures are there to learn and take as an example, aren’t there, guys?” Hayri Bey asked.