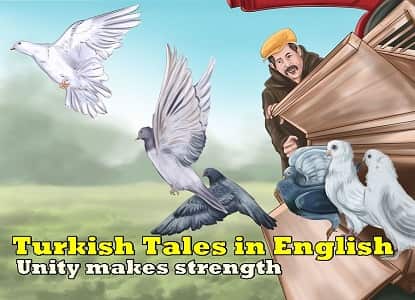 In our series of educational tales, we would like to publish a proverb tale called “Unity makes strength”, a well-known and heard Turkish tale.

It is not known whether it was a month or a year in the past. Once upon a time, there was a great forest whose lands were fertile, whose waters were sweet, and covered with trees. The green of this forest was plentiful. Its waters flowed profusely. Therefore, various game animals lived in the forest. Hunters often came to this forest to hunt. Dozens of wild animals perished because of this every day. One of the crows living in the forest built his nest on a high tree in order to see what is going on. He can see everything from here, but he is not seen by Hunters.

One day, while he was resting in the Crow’s Nest, he saw a man coming towards the Forest. From the net in the man’s hand, she understood that he was a hunter. The Crow began to watch the hunter intently. Damn, he hated potential Hunters. He saw them as a bogeyman. But this Hunter looked worse than the others to the crow’s eye.

A moment later, Adam stretched his net in a sparsely wooded part of the forest. He sprinkled a handful of wheat on top of it. Not long after, a flock of pigeons glided down onto the net. The pigeons, unaware of anything, began to eat the grains of wheat. But after a short time, they realized the disaster that had befallen them, They realized that they were trapped in the Net, that they had fallen into a great trap. The pigeons started to struggle and scream to get out of the net. It was only a matter of time before the Hunter came out of hiding, The oldest pigeon who understood this;

-“My friends, stop the noise, do not shout. Shouting will not save any of us from this hunter. But it will benefit the Hunter. If we try to get out of here alone, we will fall into the hands of the hunter one by one. Let’s calm down now, it’s time to be Unity, Remember “Unity is Strength”. Listen to me now. Use the method I think to get rid of, “he said.

Doves trembling with fear; They said, “We are listening to you, we will do whatever you say”. Thereupon the old dove said, “Now we will all flutter and fly together. Together We can take off together by flapping our wings at the same time and in the same direction.

The pigeons liked the old friend’s idea very much. With his command, they flapped their wings and took off. The crow was watching all these events from the tree he was perching on, he was amazed by the old pigeon’s mind, he said to himself, “I have to watch the pigeon flock, I have to see what will happen and learn by myself”, and started to fly after them.

Seeing the Hunter Net take off, he came running, But he could not catch up with his net. He started running in the direction the pigeons were flying, hoping to make him angry somewhere. The old dove saw the Hunter following them. He said, “Friends, the Hunter is after us. To make him lose our way, let’s fly towards the City, he can’t see us through the buildings. So we can save our lives.” Pigeons began to fly over the city. Soon after, the hunter lost sight of them.

The pigeons are placed in the place where the mouse lives with peace of mind. The name of the mouse, who is the friend of the old pigeon, is Zeyrek. Zeyrek has dug dozens of holes in its nest against possible dangers, No one knows which hole goes to the nest but himself. The old dove called out to Zeyrek; Zeyrek said, “No matter what hole you’re in, I need you.” In Zeyrek; “Who are you and what do you want from me”. He replied by saying. After the old Pigeon said “I am your friend Pigeon, I fell into a trap with my friends. I need your help”, Zeyrek came out of the hole and came to the Pigeons. Indeed, the pigeons were in a very difficult situation.

Zeyrek is in astonishment; “My dear friend, how did you fall into this trap, Let’s say you fell, Then how did you carry this net here?” He asked. The old dove took deep breaths; “What’s surprising about this Zeyrek, Our environment is full of hunters who want to trap us, and it’s inevitable to step into such a situation every now and then. How do we know what will happen to us when and where? Isn’t life always like this? There is nothing that cannot be accomplished when you do it, my friend,” he said.

The mouse started to gnaw at the knots to save his tired friend from the net. But the old pigeon objected to this; “Brother Mouse, You and I are two good friends. If I untie the knots I am tied to, you will get tired and you can stop saving the Other pigeons, So you gnaw other pigeons’ weddings first, I’ll be the last, I know that even if you’re very tired, you won’t give up on gnawing without saving me”. Zeyrek was very touched by these words of the old pigeon and said to him, “I am a very lucky mouse to have a friendly Loyal friend like you, You are truly an incomparable friend.” To gnaw the weddings of the smallest pigeon

The Mouse Gnawed the Knots With So Effort that Before long the whole flock of pigeons was liberated. The old pigeon thanked Fahriye and left with his friends, flapping their wings.

Dear children, The importance of Solidarity, Being Together, In other words, Unity is emphasized with the phrase “Strength comes from Unity”. Remember, to be Unity is to be Strong.