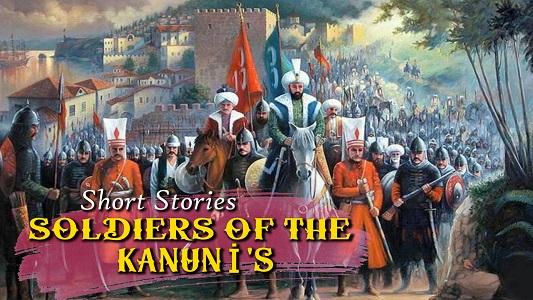 SOLDIERS OF THE KANUNİ’S / Historical Stories

Suleiman the Magnificent went on a campaign with his army to put an end to the Crusader attacks. The army was advancing slowly. As the road was narrow and the weather was very hot, the soldiers were writhing with thirst while the army had to pass through the vineyards. While passing through a vineyard with beautiful grapes, a soldier could not bear it and quenched his thirst a little by plucking a bunch of grapes from the vineyard. Then he continued on his way, tying a coin to the vine tree, much higher than the grape he had eaten.

A break was soon taken. The soldier saw a sweaty peasant come running. The Christian peasant insisted on meeting with the sultan. They took the villager to the presence of Kanuni. Law asked:

“What is this, you’re covered in sweat, or did the soldiers hurt you?”
“I came not to complain, but to express my satisfaction. It would be unfair not to congratulate such a soldier, such a commander.”
“What have my soldiers done to please you?”
“After your soldiers had passed through the vineyard, I saw a pouch attached to the branch of the vine. When I opened it, there was money. When I looked carefully, I saw that a bunch of grapes had been plucked. I understood that it was left as the money of the grape that was plucked. As long as you have such a good moral soldier, your back will not be on the ground.”

Kanuni ordered that soldier to be found immediately. The Christian peasant began to wonder what kind of reward he would give to this soldier. Finally, the soldier was found and brought before the sultan. Legal,
“Why do you do business without permission? Don’t you know that it is not permissible to buy property without the owner’s knowledge, even if it is paid for?” he scolded the soldier. Then he ordered that this soldier be removed from the army immediately.

The Christian peasant excitedly asked Kanuni:
“I came to reward this soldier, why did you punish him?”
Sultan:
“A victory cannot be won with a soldier who has an unlawful morsel in his crop. I was fired for this. If he had not left the money of the grape he bought, he would have been one of the wrongdoers. That’s when he would hardly even save his head.”

The same army stopped again near Belgrade. The soldiers were looking for a fountain to quench their thirst and make ablution. While he was finding a fountain near a monastery and meeting his needs, the priest decorated a few nuns and sent them to the fountain. Seeing the women coming, the soldiers immediately turned away from the fountain and turned their backs, not even looking sideways at the decorated women.

Watching this situation from afar, the priest immediately wrote to the commander of the Cross: “How can you deal with this army? They do not care about women, girls, property and property. They fight in the way of Allah by sacrificing all their property and property. They treat everyone well and do not oppress anyone. It is clear that you will be deprived of your possessions. Do not throw yourself to death!”